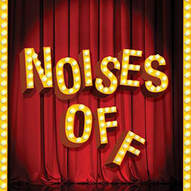 Called “the funniest farce ever written,” Noises Off presents a manic me-nagerie of itinerant actors rehearsing a flop called Nothing’s On. Doors slamming, on and offstage intrigue, and an errant herring all figure in the plot of this hilarious and classically comic play.

Three unlikely friends take control of their office and learn there is nothing they can't do, even in a man's world. 9 to 5 The Musical, with music and lyrics by Dolly Parton is based on the seminal 1980 hit movie. Set in the late 1970s. this hilarious story of friendship and revenge in the Rolodex era is outrageous, thought-provoking and even a little romantic.
Director: Jason Plake
Performance Dates: Nov. 8-9-10 & 15-16-17, 2019
Show Sponsor: Encompass Credit Union; also made possible with grants from TAF, IAC, NEA

The scene is set when a group of people gathered in a country house cut off by the snow discover, to their horror, that there is a murderer in their midst. Who can it be? One by one the suspicious characters reveal their sordid pasts until at the last, nerve-shredding moment the identity and the motive are finally revealed. The Mousetrap is the longest-running play in the history of London's West End.
Directors: Margy and Top Fletcher
​Performance Dates: Jan. 24-25-26, 2020

Disney's The Lion King has captivated the imagination of audiences around the world and now the African savannah comes to life on your stage with Simba, Rafiki and an unforgettable cast of characters as they journey from Pride Rock to the jungle... and back again, in this inspiring, coming-of-age tale tale featuring the iconic Circle of Life, I Just Can’t Wait To Be King, Hakuna Matata, Can You Feel The Love Tonight, and more.
Director: Megan Bates
Performance Dates: Feb. 28-29, March 1, 2020

All shows are performed at the
Tipton High School Auditorium
619 S. Main Street, Tipton, IN 46072